MICA has settled down at the FESPACO Headquarters this year. This framework for the promotion of African cinema and exchange between producers, distributors, project proponents and broadcasters during the festival has innovated. MICA 2021 is now part of the FESPACO professional section known as FESPACO PRO which includes, in addition to MICA, the Yennenga Workshops, Yennenga Liboni, and Yennenga Connection. FESPACO PRO aims to support the various filmmaking segments and is opened to film producers and distributors, streaming platform operators, broadcasters, African film festivals, national, regional and international institutions and bodies financing African cinema, and creation and coproduction support mechanisms. Adjaratou Bancé, Director of MICA 2021 said this is an opportunity that FESPACO provides for African cinema and audio-visual professionals to reflect on the various profession of the industry. MICA helps establish links between international buyers and sellers of African film and audio-visual works. In addition to business meetings, MICA 2021 will host, up to 22 October, roundtables, master classes, and an international colloquium on the theme of the current FESPACO edition.

Three times the tour of the filmmakers’ monument and a moment of silence in memory of the departed. If « the dead are not dead », then where are they ?

Filmmakers, actors and actresses, movie industry professionals and the highest authorities for Culture of Burkina Faso and Senegal, Country Guest of Honour, have sacrificed to the traditional libation ceremony. 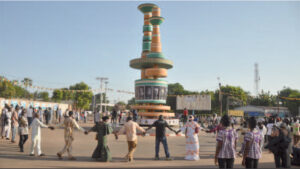 This ceremony always takes place on the second day of the festival at the filmmakers’ square to pay tribute to departed industry professionals. They are now more physically but they remain in our hearts, in our minds for the dead are in the flowing water, in the blowing wind. This is why they must not be forgotten. This year’s ceremony was quite simple and showed the depth and warm of the deed. During his speech, FEPACI Secretary General Cheick Oumar Sissoko poured water on the ground, a symbol in Africa to pay tribute to the dead. For him, the symbol is as old as the world because for millennia each society has had a specific way of paying tribute to the dead. This is a way of asking the ancestors to welcome our predecessors. He added that the symbol behind the libation ceremony is also show the living that they will always be remembered, and same for their works and images. Hand in hand, filmmakers and professionals from Africa and their peers from other regions of the world toured three times the filmmakers’ monument. A moment of silence was also observed in their memory. The libation ceremony was followed by the unveiling of the statue of Alain Gomis twice winner of the Etalon d’or of FESPACO in 2013 and in 2017. He statue now stands at the Colonne des Etalons (Gallery of the Grand prize winners). The statue was unveiled in the presence of Burkinabe Minister of Culture, Arts and Tourism, and the Minister of Culture and Communication of Senegal, Guest of Honour of FESPACO 2021.

Esther is 6 years old; she lives her carefree life as a little girl until her father abuses her.  Then a little box appears in her life and never leaves her side. As she tries to get rid of it, she discovers her mother’s; but her mother doesn’t see it… until she meets the fascinating Farah.  Three Leaves. Three stories of women exploring the roots of identity, resilience and sisterhood.

Sephora MONTEAU is a founding member and vice-president of SineNouvèl, an association of committed filmmakers and photographers in Haiti denouncing the lack of film facilities in the country. She is also the founder of Nègès Mawon, a feminist organization.

Eléonore COYETTE captures in her photographs and videos the world’s indocile heartbeat. Her visual grammar is that of a poetess.

A long, long time ago, on the shores of the great lake of Africa there once lived a superhuman warrior by the name of Lwanda Magere. He had skin of stone and the strength of ten men. Invincible, benevolent and loyal, Lwanda was the hero his people had always longed for, a hero to protect them from the deadly neighbouring raiders. However, the secret source of Lwanda’s powers was the target of his enemies, enemies both from the outside and within.

Kwame is a Nairobi-based writer, illustrator and animator whose interest lies in creating stories that show a more positive and genuine view of Africa. He is well known for his children’s books A Tasty Maandazi and I Love Ugali and Sukuma Wiki and The Yummiest Githeri. Kwame’s animated short The Legend of Ngong Hills has won many awards worldwide. He has also worked on Tinga Tinga Tales. In 2017 and 2018 Kwame part of the team that won awards at the Cannes Lions International Festival of Creativity for The World’s Most Eligible Bachelor, a campaign supporting northern white rhino conservation.

Noticing the rapid encroachment of the desert in his village, Yakuba decides to give up everything and to fight against this arid land, practicing a quite special technique of his own.

Claver YAMEOGO has an extensive experience in comics trip and visual arts in general. In 2008, he attended an initiation training in 2D cartoon at Institut IMAGINE. In 2009, Claver made his debut cartoon called Polo, opening the way to a scholarship in France at EMCA. He has directed two graduation films (Le jour de mes sept ans and Parce que j’ai faim) in 2021; two documentaries in 2013 (Invasion déchets plastiques and Invasion de motos au Burkina Faso) and FALTA (winning an award at the 2017 Animated Film Festival in Abidjan) in 2016.

For ten years, I’ve pretended to make a movie out of my grandfather’s Algerian war souvenirs. Today, I’m not sure I want to hear what he has to say…

Bastien DUBOIS earned his diploma in CGI Directing from Supinfocom Valenciennes with his graduation short AH in 2006. Bastien is a keen traveler. It was after he hitch hiked from the north of France to Istanbul that he had the idea of making an animated travel log. His first independent film Madagascar, a Journey Diary was based on a one-year trip to the big red island. This film was very well received and screened in more than 200 international film festivals including Sundance. The film ultimately garnered an Oscar nomination in 2011.
In 2012 he directed a TV program based on Madagascar, a Journey Diary called Faces From Places a series of 20 animated 3 minute travelogue films featuring various countries around the world. In 2013 Bastien released Cargo Cult, an animated short film which is set in Papua New Guinea during the second world war.

SouleyMan is a young child and fan of a superhero who rescues people in danger in his city. The superhero inspires him to do good in his neighbourhood.

2D and 3D illustrator and animator Aloïs AGBOGLO began drawing at the age of 4. He is a self-taught person for there is no animation training school in his country, acquiring his knowledge in this field from Internet. His passion for animation won him several awards and his films have showed at prestigious festivals.

She doesn’t want her husband to have a voice in their household so that he will not give chores to Salia, while her biological son Alain lives like a prince. It’s rivalry all the time. She goes to a witch doctor to kill Salia so that she doesn’t have anything to inherit. Unfortunately, her son falls victim, another reason for charging Salia.

Going against her husband’s wishes, Ayélé secretly sends her daughter Mofiala to study in town. Years later, an epidemic of unknown origin strikes the town. Now a doctor and bacteriology researcher, Mofiala seems to be the ideal person to halt the problem.

KPADENOU Kossi Hunkpati aka Boris KPADENOU is a 2D animated film director from Togo. After completing his post-graduate studies, he began drawing, his passion. He trained in 2008 as animated film technician at Institut IMAGINE in Burkina Faso. In 2017 he created the Studio ARUKA. Illustrator with several communication agencies, he has made some 2D, 3D commercials and institutional films. His film Mofiala won the Jury Prize at Festival EMERGENCE in 2020.

Mark of Love is the mighty story of a little adventurous girl who, with the help of a mysterious maned wolf, goes on the traces of her lost mother who disappeared into a giant menacing dark castle. What’s the secret behind this Castle, with the maned wolf and the fire lord living inside?

2D artist, illustrator and 2D animator Hermann was born in 1984 in Côte d’Ivoire, West Africa. During childhood he discovered big animated movies that changed his mind and later his life. He decided to travel in France in order to study animation and art in general to improve his skills. After that, he created several. Hermann joined the African animation studio Animax FYB in November 2020 as an 2D animator and storyboard artist.